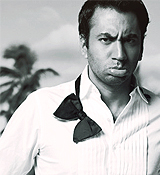 Welcome to Kal Penn Fan, your #1 source for The Namesake actor and currently White House Liason Kalpen Suresh Modi, better known as Kal Penn. You might know him as Kutner on House M.D. or as Standford in Superman Returns, but he's most well known as Kumar Patel in the iconic stoner buddy comedy Harold and Kumar film franchise.

Clarice
Shaan Tripathi
A look at the untold personal story of FBI agent Clarice Starling, as she returns to the field about a year after the events of The Silence of the Lambs (1991).
IMDb Official
You Can’t Be Serious
Author
In this refreshingly candid memoir, Kal Penn recounts why he rejected the advice of his aunties and guidance counselors and, instead of becoming a doctor or “something practical,” embarked on a surprising journey that has included acting, writing, working as a farmhand, teaching Ivy League University courses, and smoking fake weed with a fake President of the United States, before serving the country and advising a real one.
Info

Book Drop   |   November 2, 2021 BUY TODAY
Kal-Penn.com is NOT official. This site is in no way affiliated or linked with Kal, his management or anyone affiliated with him. I am not Kal, I don't know him, I can't pass on messages to him and I am not in contact with him. This website was created for entertainment value only. If there is any content on this website that you feel violates your personal property/copyright, please let me know and it will be promptly re-credited or removed. Images and information on this site are not posted for commercial gain, and are used under the § 107. Limitations on exclusive rights: Fair use Law 107. All images and information are property of their respectful owners. This site does not claim any copyrights, no infringement intended.